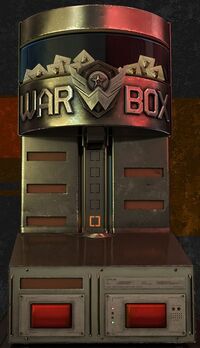 The Warbox System allows players to try their luck and open Warboxes for a chance to get rare items. Warboxes can be purchased with WFD, Kredits, or PvE Crowns.

You can select and purchase Warboxes available in the shop. You can purchase up to a set of 5 boxes. Buying 2 or more at the same time offers a small discount for each additional box. Pistols and Melee weapons are normally cheaper than primary weapons.

If the Warbox has a Gold weapon as a possible reward, you will be guaranteed to obtain the Gold weapon after opening 1000 Warboxes of that weapon if you did not obtain it yet. The amount of boxes you opened is stored in your account.